Eight straight years of intensive writing instruction in high school and college make me shy of writing exercises. I’ve been there, wrote that. 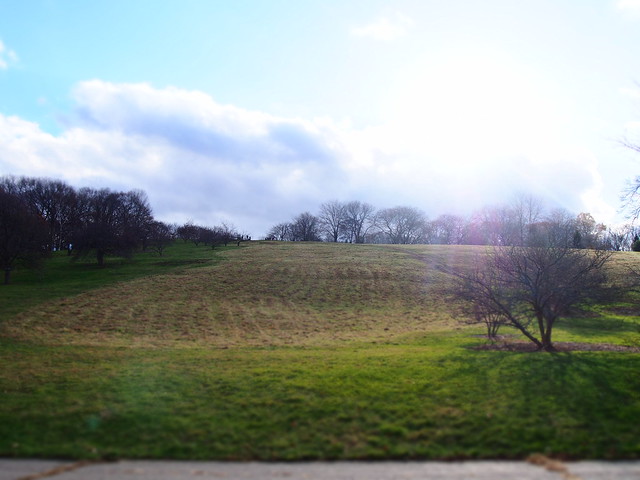 However, on the occasion a member of my writer’s group suggests an exercise, I put on my big girl pants and I make good.

Below is a dot of fiction, based on a song (Deb Talan’s “The Gladdest Things“), which follows a poem (Edna St. Vincent Millay’s “Afternoon on a Hill“). Fast on the heels, and interspersed, I’ve included photos of the location I had in mind while working on the exercise. Turns out, this a piece I quite like, so thank you Megan.

For a Song, for a Poem
He touched my hand. It wasn’t to make a statement. The touch felt light, as though he was attempting to tell me, without disrupting the moment with the sound of his voice: hey, this is where we’ve been.

On the hill we biked up, we sat not on the boulders placed for lounging, sharp edges that jabbed into your hip. Instead on the grass, trodden and pokey with sticks and branches torn down by the same late summer winds that kept the trees on the hill growing only-so-tall. 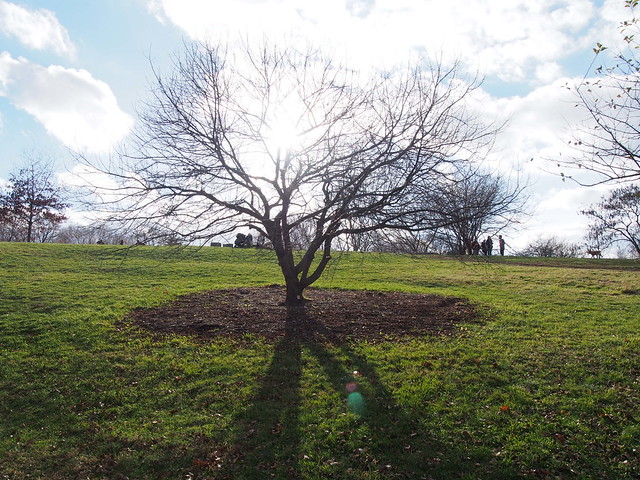 In the far distance, our city. In the near distance, hazy and harder to make out, our neighborhood. Houses that fit well in either city or town; where we grew up being some sweet in-between.

In less than two weeks, the two of us would leave. No longer come to this spot where tussling dogs forced their owners to interact. The crab apples dropping, and rotting, without us. Each chipmunk feeling that much safer with two fewer humans. 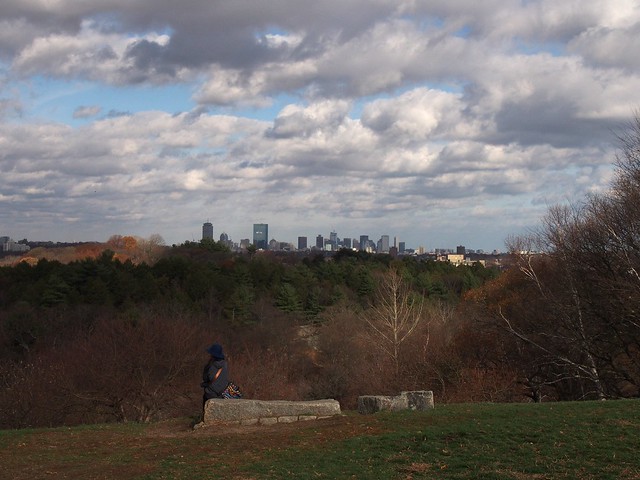 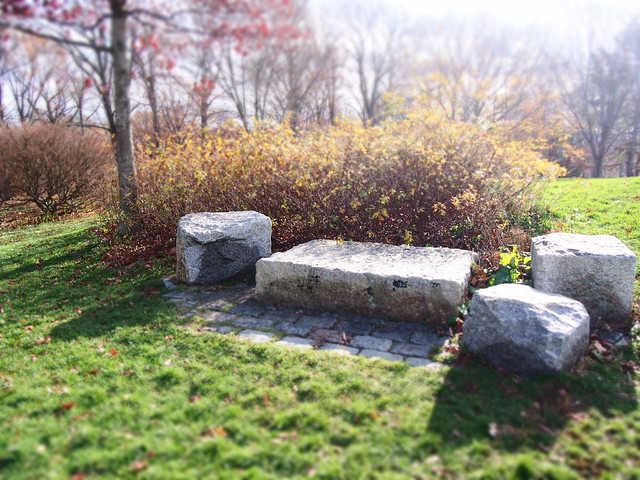 I to my West Coast college, and my friend to the Navy. We laughed about his new white suit. How hot he was going to be when he came to shore on the occasion like a sea-mammal up for air. The girls passing by who would turn their heads without realizing they’d looked. Some boys, too.

We used up our laughs, and smiles. Just tears left that neither of us felt brave enough to spend, so we stood, dusted our butts, and started down. 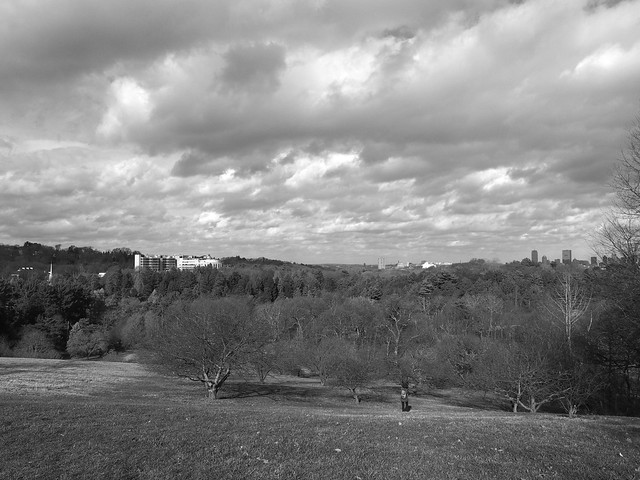 It is said that winter is a time for slowing down. For thinking, planning which seeds to sew. Silence and introspection.

It is the time of death . . . and waiting for life renewed.

Also, winter presents opportunity. Texture. A time to wander and be . . . and simply observe.

A blizzard will most certainly reset a person’s weekend plans.

Instead of crawfish at a friend’s Mardi Gras party and a charity dinner hosted by Haley House called the Souper Bowl (yes, pun intended), we enjoyed sleeping in, snowshoeing at Arnold Arboretum, reading, shoveling with neighbors, and -because we were lucky enough to have power throughout- cooking/baking. Lots and lots of cooking/baking.

The hard part was standing up again!

How did you take advantage of the opportunity to do a little less?

I have a funny relationship with pedestrian crossing signals: sometimes I don’t want to push the button. Yes, I want to cross the street. No, I don’t want to be struck by a vehicle.

For much of my life, crossing safely with the light hasn’t been an option. See a busy street, dart across. Or: see an empty street, meander while the traffic is far, far away. Steady red hand for both. The flashing walk or “white man” (as my cousin calls it), nary to be found. Boston in particular boasts many twenty-second count-downs at four/five-lane, highway-speed boulevards. (Thanks, Boston.)

Then I moved to JP and met, exhibit A: my favorite walk signal.

It may not look like much, but this crossing sign at the Arborway not only responds with the most satisfying speed, it also has a comfortable space in the middle to wait if need be.

<tangent>I once heard a father tell his two young children “well, now you’ve screwed yourselves!” when they rushed the light and got stranded. He wins the award for the most inappropriate and darkly amusing thing said to kids trapped between lanes of speeding vehicles.</end tangent>

I readily admit that I’ve taken friends to visit this cross walk towards the green goodness of Arnold Arbs. It’s that great.

Exhibit B: the walk signal with which I have a more complicated relationship. Press the button and you usually have to wait. And then, embarrassingly, traffic on a very busy, very fast road is brought to a halt so that you, in all your importance, can saunter across for something like forty seconds. You could execute some fantastic cartwheels during that time.

I was very excited when the city installed this cross walk last year, because getting from one side to the other at Jamaica Pond was the pits. Now, though, when all those cars stop and wait for me, I am filled with guilt. Maybe it’s complexity of that portion of the Jamaicaway, or the fact that I’m often the only one crossing and, with my bike, this act takes probably five seconds. Not that I think the city should change it . . .

Two signals on the same road and a different relationship with each!

Today, taking a break from writing, I wandered the Arnold Arboretum. Now, I’ve long known about the metal identification tags attached to most of the trees, imparting information about the species, Latin names, all that. However, this afternoon I discovered the key to reading those labels and lo, behold! Suddenly I have access to a whole new way to experience the collection.

It does not escape me that, living in one of this country’s oldest cities, I spend a lot of time considering the country.

Upon finishing the second issue of Taproot magazine, steeped in the values of living simply, slowly, heart-full, back-to-the-earth, I thought: this is me, this is not me.

I believe in sitting out on the porch, shucking corn. I believe in long walks through green places. In white flashes of deer tails, rabbit tails, and rusty, shaggy foxtail.

I also, believe in escaping the bumper-to-bumper to hit up the ice cream counter. Barely comprehending my luck that this planet holds things cold and milky, vanilla with peanut butter swirls.

I’m a child of the suburbs. Beachtown creaky, my younger years held splinters from Jersey Shore boardwalks, screams from the top of the crickety, wooden ‘coaster. Paper tickets from ski-ball and wack-a-mole games that I traded for spider rings whose cheap plastic pinched my fingers.

The city has me, the country attracts me.  In between, I both rue and appreciate the Christmas-light palaces of the ‘burbs.

It’s my lot, I think, to refuse claiming -or being claimed- by one, the other, or the third.  I’d rather find value in them all.

Since my days organizing for the National Organization for Women, I’ve learned that I am not an activist (by the stricter definitions.) Although I’m a daughter of the Civil Rights, Black Power, and flower child/hippie movements, my skill and interests lie in building community: connecting people, listening, assessing, and building empathy. I’m drawn towards the methodologies of Non-Violent Communication, mediation, Co-counseling, and dialogue.

I enjoy spending time with activists, spinning the energy from those connections into an adjacent creativity and passion (with a dash of impishness) that comes more naturally to me. However: invite me to mini-fy it and I’ll jump right on your bandwagon.

{this moment} – A Friday ritual (joining Soulemama.) A single photo – no words – capturing a moment from the week.

I’ve been remiss in posting to Whole Heart Local.  Not because I have nothing to say, but because I am doing too much, which leaves scant energy for writing or crafting.  Good thing the HEAT descended on Monday (over 80 degrees . . . in April!)  I thought I’d never have the opportunity to laze around the neighborhood, doing nothing, accomplishing even less…

Of course, it’s also true that my annual custom for Marathon Monday is to move as slowly as possible to counterbalance the twenty-thousand-odd runners thundering through the Brookline and Back Bay as part of the Boston Marathon.

So my day consisted of:

Snoozing under the Cherry Blossoms in the Arbs

Brewing up some sun tea

Watching the cat, hotbed of activity that he is

Trying out a new two-person board game

What did you do on Hot Monday?

Every year, just as the temperature outdoors dips towards reasonable, and the buds and leaves start to unfurl, I think. No! Wait! I’m not ready.

You see, the problem is, spring just moves too fast. From the first crocus I spot, to the squirrels rocketing about, to the birds waking me up at 5 AM with songs I never seem to recognize from year to year; it could all move a lot slower. I mean, what’s the rush? Summer stretches, winter is the worst kind of hanger on.