What is it? Which is it: Art? Commentary? Joke? Warning? Invitation?

Early Childhood
When you were a baby, your hair grew in layers
You have fine hair
Look at all that hair!
Don’t ever cut your hair, child
What a beautiful girl, all that thick hair
Wow! Her hair is so looong
Bushy
Dookie braids
That nappy head

Middle School
Bushy
Nappy head
You tender-headed?
How come she don’t straighten it?
You got too much hair
Stuck up about her hair

High School
She got naps at the back of her neck
I like your braids
Can I touch your hair?
Did you cut off all your hair and get extensions?
Please shut the bus window, girl who doesn’t have hair that blows in the wind

College
I like your hair
You only wash it how often? Is that normal?
Your hair has beautiful texture
Can I touch it?
I don’t know why you don’t always wear it like that
You cut off all your hair???!!!
Wow
I love your hair short
Excuse me, sir 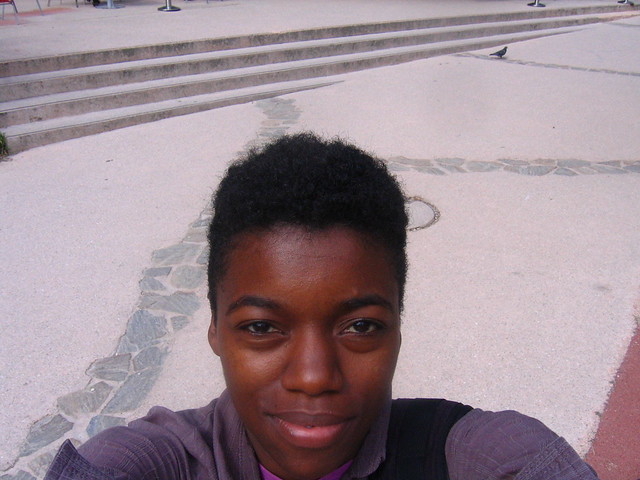 Post College
Your nappy head
I love your hair
Mom, that’s not a boy!
And who is this new young man?
Are you growing it out? (Please grow it out)
Great ‘fro
Oh, you say ‘natural’?
Aye mama, your hair is mucho BOOM!
Can I take your picture?
Can I interview you about black hair?
What do you do to your hair to make it look like that?
What products do you use?
How long have you been natural?

Context and Subtext
Nonexhaustive. No particular order. Check one or all that apply. 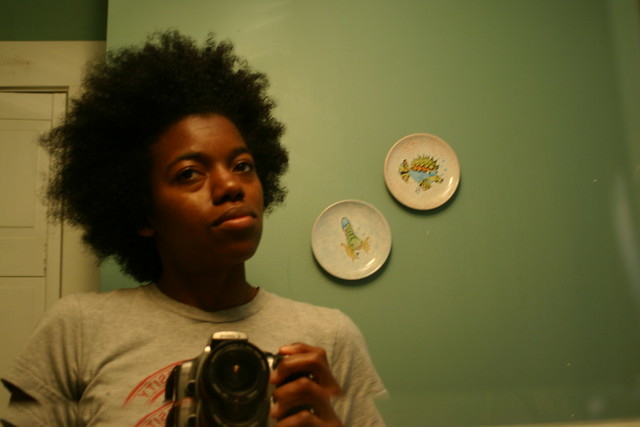 Posted by Phoebe | Filed under What Is It 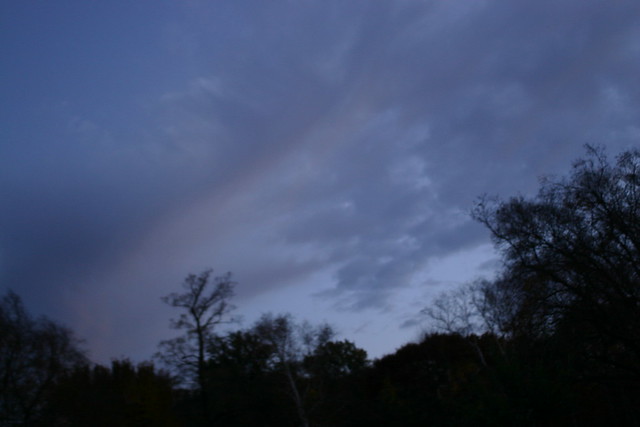 Your laundry. It’s locked in the Laundromat and you can see it, unmoving, in a top dryer. The sign on the door reads that the ‘mat closes at 8 PM. It’s 7:45 PM and you need those pants for work tomorrow. Annoyed.

You step onto the bus and realize you don’t have enough on your ride card. Crap. You fumble to find actual cash while other riders queue up behind you. The bus driver exudes distrust while you struggle to add money to your card using the ridiculously complicated system. Finally, the driver says something impatient, and your eyes snap up. Aggravated.

You walk out of the building and 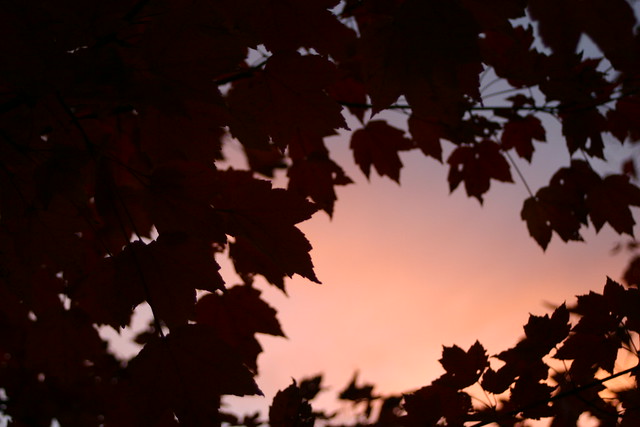 You’re eleven years old. You stand on a corner in your neighborhood, not doing much of anything. A car whizzes by and a young man leans out the window to holler the N word. Shocked, you pause in confusion, listening to the hysterical laugher recede as the car retreats. At first you think the slight will slide off; instead it permeates. There’s an almost audible click and you are rushed with random childhood injustices, more focused micro-aggressions against your color and gender, your own American slavery lineage, and the rush becomes a deluge, you’re experiencing not just your own but drawing from a ground spring, a geyser of . . .

I remember September 11th. I worked at a dotcom and the news of the towers, fire, and terror spread slowly around my office. As the story evolved from accident to intention, no one could concentrate. TVs came on. My co-workers stared in horror and someone said, “I don’t understand how a person could do this.”

The desire to inflict deep, unassailable pain, the planning, the getting on those airplanes, the flying –I found none of that imaginable. Horrific. Repellent. But when I looked inside myself, I realized I understand how rage grows. How it collects, fuels, feeds. I watched the country take a deep dive into that rage, post 9/11. We flailed, grieved and struck out. I wanted to go back to that conversation with the co-worker and ask, haven’t you ever felt . . .

You’re no longer you. A vessel. A conduit. You’re at service to however it manifests, whatever looks like. You’re the place where hurt and outrage and fear and grief swirl, twirl, bubble, punch, jerk, get good and mixed. Then you reach down and borrow from someone else, maybe many someones so together you can

Scare the heck out of everybody. Including yourself. Hurt somebody. Maybe yourself.

From small slights to the catastrophic, it’s there. Rage is equal opportunity. It’s rarely right-sized. It’s patient. Will wait years for you to step unwittingly. You can try to press it down, rationalize it, breathe it away but sometimes it’s just like . . .

In the next moment, your world is different. 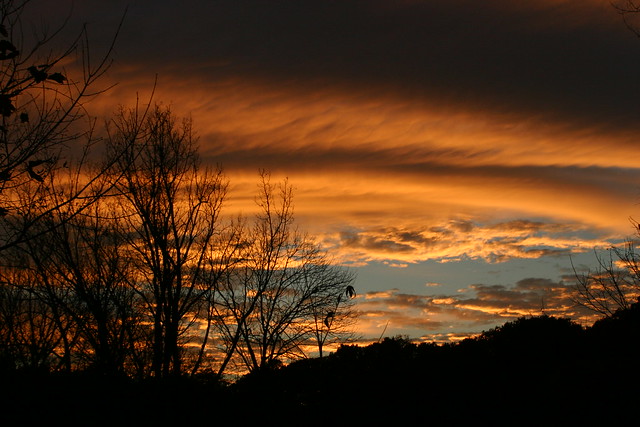 One of the things I appreciate most about long-term friendships is that we get to grow and change together. 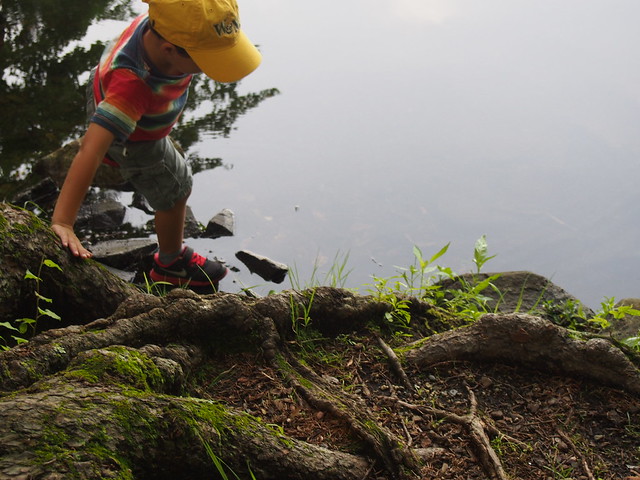 We’re sold the idea that friendship is telling secrets at summer camp, laughing over the fryer at that first job, playing video games in the college dorm, or drinks with buddies at the bar. Thank goodness that’s not all. I’m glad the experience isn’t so simple or static or one-dimensional. 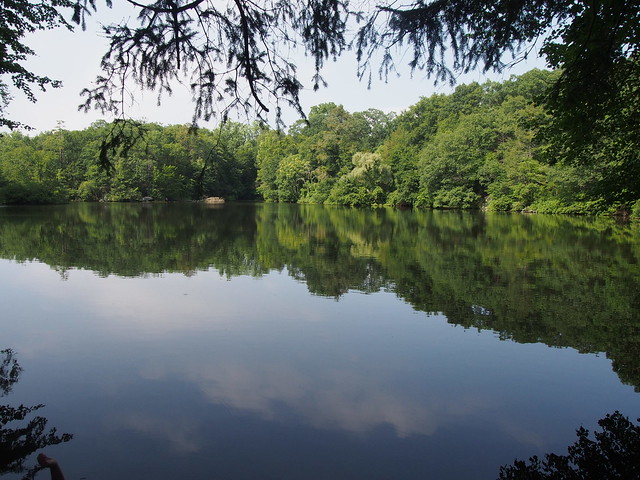 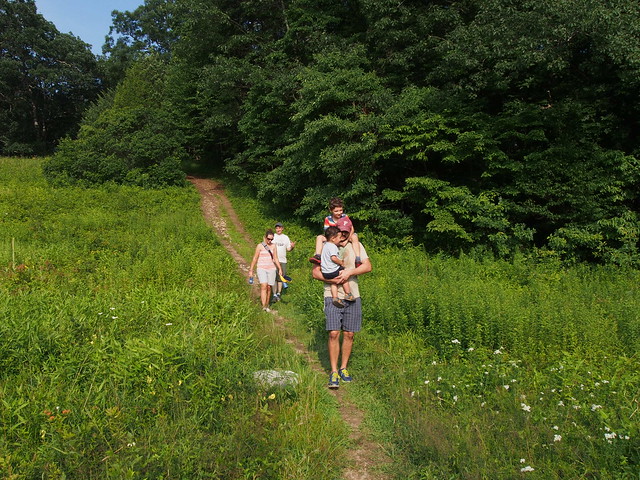 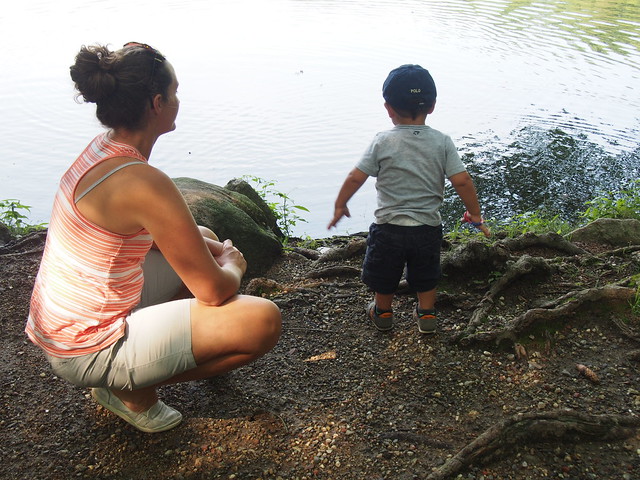 Even when it makes me sad or wistful, I’m glad that the long-term friendships in my life have included moving boxes, commiserating over disappointments, tales of exhaustion and woe. I’m glad they’ve included the willingness to feel embarrassed, learning how and when to give space, and listening as carefully as we are able.

Our individual worlds seem so small, but when we combine forces -live our lives together- they feel large. 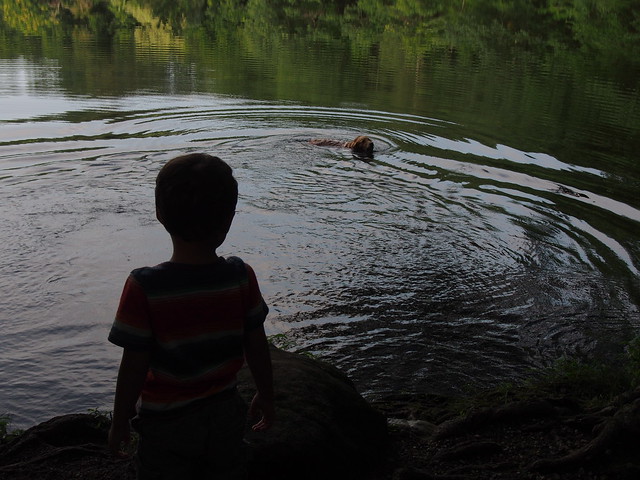 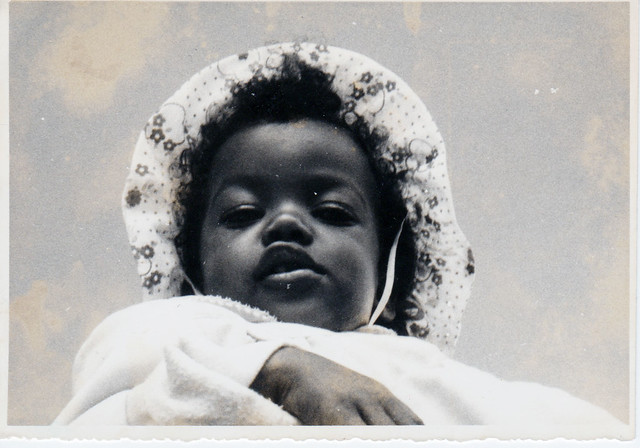 I was raised radical. You can tell by just by looking at me. Right?

When I recount my childhood, the images I share, the stories I choose: organic garden in the back yard where I ate horseradish and sucked on sugar cane straight from the earth; reading the Qur’an beneath a tree with my mother and brother; celebrating Kwanzaa instead of Christmas; my brother writing reports on important Black people in history, which he turned in to our parents; largely eating and identifying as vegetarian; listening to Islamic prayers on the radio on Sundays; my parents splitting childcare equally (or so it seemed to me); and going places and attending events that did not seem to appeal to other Black families (NJ State rock & gem show, anyone?)

I was taught character over color, over gender, but never to ignore the importance of culture. Family reigns important, but friends are family, too.

I wasn’t permitted to straighten my hair, and I can’t recall that I ever asked. 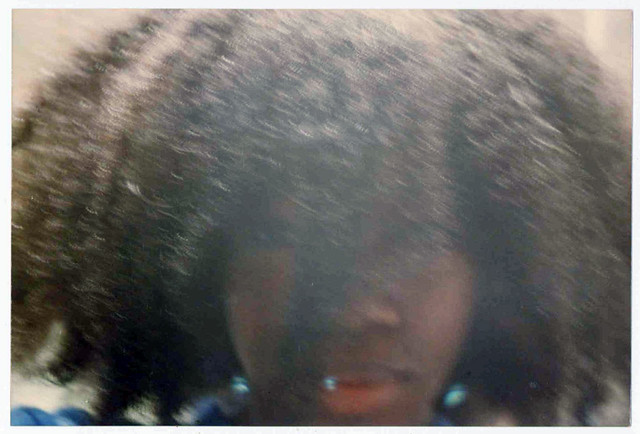 My personal political is that I’m not really all that political, not in the ways I’m used to seeing/hearing/experiencing. However, to people I meet, I’m aware that it can appear that I walk my politics: it’s my hair (“how long have you been natural?” “oh, since childhood”), my wide smile, my inability to appear or to act other than I am. I speak very little code. I’m nearly the same everywhere, to everyone. I have too many opinions about too many things. Picking one side makes my heart sink with dread, because I see the other. I don’t like to leave people out, not even myself. Where people see problems, I try to look again. And again. And again until I can pull apart what I’m seeing and find the kernel of opportunity, of creativity, of solutions -maybe just-for-now, maybe for the long term.

Like most people I’ve met, I continue to search for where I fit. With my refusal to follow the paths laid out for me, I’ve been: the only girl among boys at the 3rd grade lunch table ; the only non-GirlScout at camp, rocking that windsurfing board; the 13-year-old learning how to train bonsai trees in a class of students age 30+; the sole Black occupant at the youth hostel in Dublin, tagging along with a young White couple; the single, long-standing Black employee at a dotcom; the writer among visual artists at a Failure Support Group; novelist among dancers. 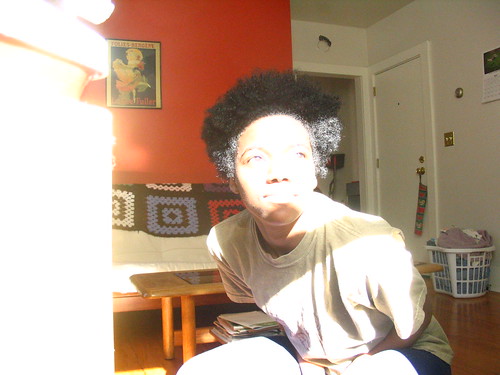 My personal political says: go, see, connect, regret, laugh, mourn, listen, struggle, learn. It does not offer answers, but sometimes it helps me find the questions.

Not so long ago, I noticed this drawing on the back side of the Rindge & Latin High School in Cambridge. 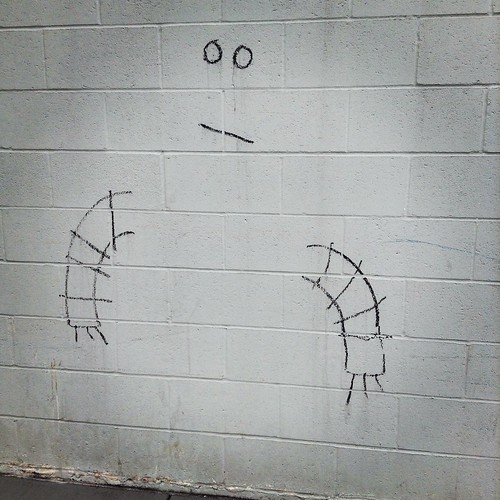 I thought: hmmm. Then, one day, I biked past at around dusk and discovered this: 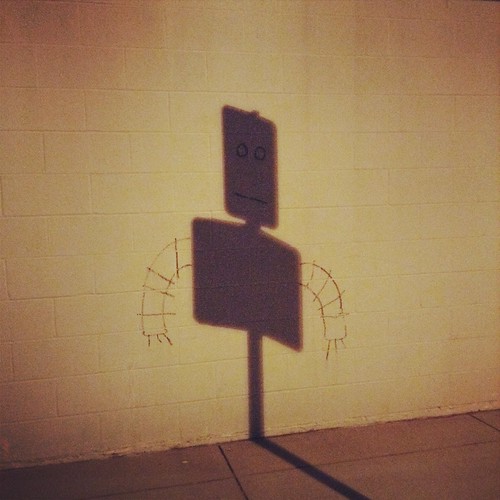 Ah ha! A perfectly placed street sign turned this bit of silliness into a full-on character, with personality. (Maybe that’s why no one has yet painted over it?) Other than graffiti or street-art, I don’t know what one calls this type of offering, but I’m a fan. Every time I pass, makes me smile.

Although I’ve since learned what these are, I react with curiosity and amusement whenever I see one. Particularly the pink mustaches.

I’ve seen and wondered about these strange street adornments that sort of remind me of robots. Mostly I’ve spied them pasted smack in the middle of Boston roadways. This guy I spotted in Portland, Maine, near our favorite restaurant. What is it?

Size of a large stone. Spotted on the beach at Jamaica Pond where community members often fish wearing waders. We had some guesses, but you tell me!